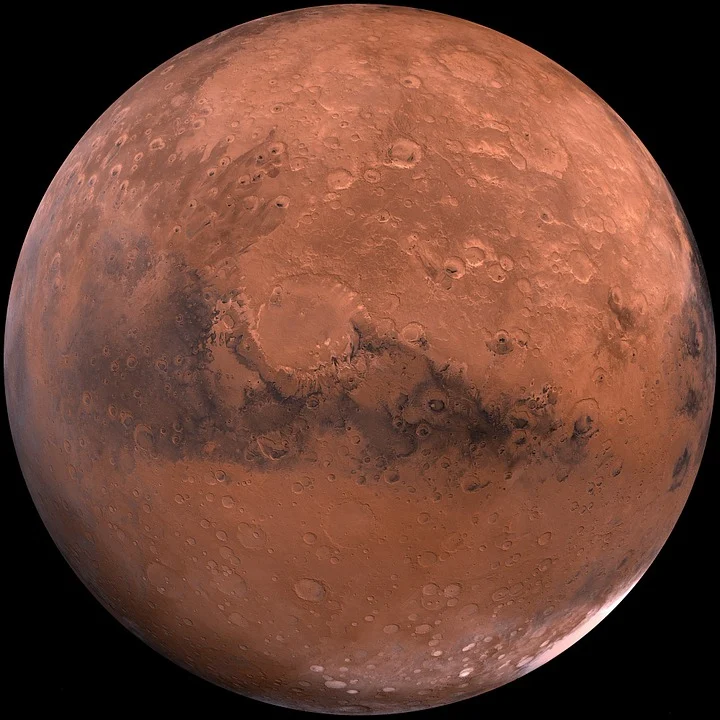 If you’ve never seen the planet Mars before, the perfect opportunity happens during autumn. The red planet will be at its best on October 13th – but what exactly does that mean for observers here on Earth? Let’s explore…

When (and How) to View Mars

At about 10pm on October 1st, the Big Dipper will be swooping low over the northern horizon in the night sky, with Draco the Dragon and Ursa Minor, the Little Bear, just above it. If you turn to the left, you’ll find the constellations of summer setting in the west. There’s Hercules, and also look out for Vega, the brightest star in the constellation of Lyra, the Lyre. Cygnus the Swan can also be seen flying through the sky, while Aquila the Eagle will be coming home to roost.

Below Aquila, toward the south-west, are the planets Jupiter and Saturn. During the fall season, Jupiter is brighter than any star in the sky. However, Mars will even outshine Jupiter during the month of October.

Keep turning to the left and you’ll see a brilliant, orange-ish star rising in the east. It’s almost as bright as Jupiter, but not quite. Mars will be moving through the constellation of Pisces and will clearly stand out among the faint stars.

If you’re not sure, you can’t miss the Moon. As the moon turns full, Mars will be located at its lower left. The following night, you’ll see the Moon just below the planet.

Over the next few weeks, Mars will rise earlier and will appear higher in the sky at the same time each night. By the evening of the 13th, it’ll be slightly brighter than Jupiter and will be an unmissable sight in the sky.

Mars will also be seen from Earth all night, as it will rise at sunset and set at sunrise. When this happens, we say the planet is at opposition, because the planet is opposite the Sun in the sky. Also, Mars will be closest to the Earth at this time, making this the ideal time to turn a telescope toward it. Since the planet is at its closest, it will appear larger than at any other time.

Incidentally, don’t believe those Facebook memes that tell you that Mars will appear as large as the full Moon – that’s simply not true. It’s physically impossible!

Even with a small telescope, you should be able to take a closer look and see what Mars looks like. You may spot the dark markings on the planet’s surface, as well as the glint of the northern polar ice cap.

Much harder to see are its two small moons, Phobos and Deimos. These moons are very small and might even be captured asteroids! They’re quite faint and require a larger telescope to see them.

What if you haven’t got a telescope? Fortunately, we’ve sent a lot of spacecraft to Mars over the years, and nothing is better than a front row seat from the surface! The latest active Mars rover is called Perseverance, and it was launched by NASA on July 30th, 2020. It is expected to land on Mars in February 2021. Also known as Mars 2020, the Mars Perseverance rover has a primary mission that is quite exciting. It will search for signs of ancient life on Mars!

Of course, before you get too excited, please note that we’re not expecting to find any little green men! If we find anything at all, and it’s a very big “if,” it will be in the form of microbes. However, even the smallest microbes would prove that primitive life once existed elsewhere in the universe.

In all, there have been over 50 missions to Mars. The first attempt was by the Soviet Union in 1960, but the first successful flyby of the planet was achieved by NASA’s Mariner 4 space probe in July, 1965. The first craft to successfully land on Mars was another NASA probe, Viking 1, in 1976. These probes showed a cold, rocky planet with an unbreathable atmosphere and no immediate signs of life.

So, why go to Mars at all? By studying the planet up-close, we might learn more about the Earth. For example, scientists believe that Mars may have once been warmer. By looking for signs of climate change on Mars, we might be better able to understand climate change right here on Earth (and a few interactive science experiments can get your kids learning more about climate change as well). Meanwhile, discovering whether Mars can support life could provide clues as to how life began on Earth — and whether life could exist elsewhere.

Together as a family, why not take a look at the red planet tonight? There may not be any little green men staring back at you, but one day humans from Earth might be walking upon its surface. And who knows? You might be one of them!